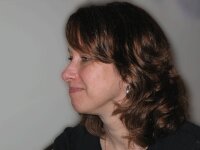 Since 2004, Dale M. Bauer has been a Professor of English atthe University of Illinois, Miami U of Ohio, College of the Holy Cross, andFranklin& Marshall College.   In addition to writing on feminist and critical pedagogy, she has also published Feminist Dialogics, Edith Wharton’s Brave New Politics, and edited collections on Bakhtin and feminism, Charlotte Perkins Gilman’s “The Yellow Wall-paper,” and 19th-century American women’s writing.  Her new book, Sex Expression and American Women’s Writing, was published by the University of North Carolina Press in May 2009.  This is a study of American women’s writing about sexuality, from 1860 to 1940, with sentimental fictions like The Morgesons and The Silent Partner to the huge bestsellers byJewish-American writer Fannie Hurst. This new rhetoric of sexuality enables critical conversations about who had sex, when in life they had it, and how it signified.

She is now studying the 50+ novels of the 19th-century writer EDEN Southworth (essay forthcoming in Arizona Quarterly), as well as editing the Cambridge History of American Women’s Literature(forthcoming Spring 2012).

View all publications on Illinois Experts

View all publications on Illinois Experts